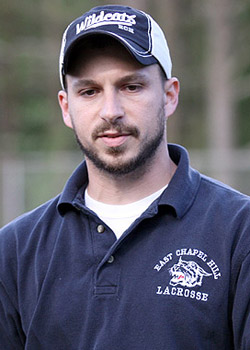 A native son, Coach Koplar has been involved in the North Carolina lacrosse community for more than twenty years. Currently serving as the Men’s Varsity Lacrosse Coach at East Chapel Hill High School, Coach Koplar began his playing career locally at Phillips Middle School before becoming a 4-year starter and Varsity Letterman at East Chapel Hill High School. In his senior year at East, Coach Koplar helped in leading the Wildcats, under the tutelage of renowned coach Sam Carpenter, to the 2000 NCHSLA State Championship game and was subsequently named a member of the 2000 North Carolina All-State Team.

After high school, Coach Koplar attended Elon University where he played 3 years as a member of the Phoenix Men’s Lacrosse club team. The team enjoyed a high degree of success within the USLIA/USL-MDIA(B) playing in back-to-back-to-back regional championships and culminating in a 2004 Top 15 Ranking nationally.

Coach Koplar returned to his hometown of Chapel Hill in 2011 and has enjoyed working with passionate players and passing on his lacrosse knowledge to the next generation of lacrosse players. From 2011-2013, Coach Koplar led the Wildcats’ JV program to nearly spotless 32-1 record and JV players continually earned their way onto the Varsity squad.

The 2014 season will mark Coach Koplar’s first season as the Wildcats’ Lacrosse Program Director and Varsity Head Coach. As always, Coach Koplar is remarkably excited to help East Chapel Hill players in their quest to improve as players and grow the sport of lacrosse in North Carolina.

Professionally, Coach Koplar teaches at East Chapel Hill High as a member of the History Department.